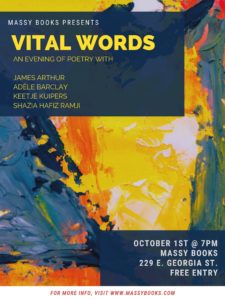 Join us at Massy Books, Oct 1st at 7pm for an evening of readings with a star-studded line up of poets!
James Arthur was born in Connecticut and grew up in Canada. He is the author of the poetry collection The Suicide’s Son (Véhicule Press 2019) and Charms Against Lightning (Copper Canyon Press 2012). Arthur’s poems have appeared in The New Yorker, Poetry, The New York Review of Books, and The London Review of Books. He has received the Amy Lowell Travelling Poetry Scholarship, a Hodder Fellowship, a Stegner Fellowship, a Discovery/The Nation Prize, a Fulbright Scholarship to Northern Ireland, and a visiting fellowship at Exeter College, Oxford. He teaches at Johns Hopkins University.

Adèle Barclay’s writing has appeared in The Fiddlehead, The Heavy Feather Review, The Pinch, glitterMOB, The Puritan, PRISM international, and elsewhere. She is the recipient of the 2016 Lit POP Award for Poetry and The Walrus 2016 Readers’ Choice Award for Poetry and has been nominated for a Pushcart Prize. Her debut poetry collection, If I Were in a Cage I’d Reach Out for You, (Nightwood, 2016) won the 2017 Dorothy Livesay Poetry Prize. Her second collection of poetry, Renaissance Normcore, is forthcoming from Nightwood Editions in October 2019. She is Arc Magazine‘s Poet in Residence and an editor at Rahila’s Ghost Press.

Keetje Kuipers is the author of three books of poems, including Beautiful in the Mouth (BOA, 2010), winner of the A. Poulin, Jr. Poetry Prize and a Poetry Foundation bestseller. Her second collection, The Keys to the Jail (2014), was a book club pick for TheRumpus, and her third book, All Its Charms (2019), includes poems honored by publication in both The Pushcart Prize and Best American Poetry anthologies. Her poetry and prose have appeared in Narrative, Tin House, Virginia Quarterly Review, The New York Times Magazine, American Poetry Review, Orion,The Believer, and over a hundred other magazines. Her poems have also been featured as part of the Academy of American Poets’ Poem-a-Day series and read on NPR’s Writer’s Almanac. Kuipers has been a Wallace Stegner Fellow at Stanford University, a Bread Loaf fellow, and the Margery Davis Boyden Wilderness Writing Resident, among other honors. She now teaches at Seattle’s Hugo House and serves as Senior Editor at Poetry Northwest.

Shazia Hafiz Ramji is the author of Port of Being (Invisible Publishing), a finalist for the 2019 BC Book Prizes (Dorothy Livesay Poetry Prize) and Gerald Lampert Memorial Award. It was named by CBC as a best Canadian poetry book of 2018 and received the Robert Kroetsch Award for Innovative Poetry. Shazia’s writing has appeared or is forthcoming in Poetry Northwest, Best Canadian Poetry 2019, Music & Literature and Quill & Quire. She is at work on a novel.