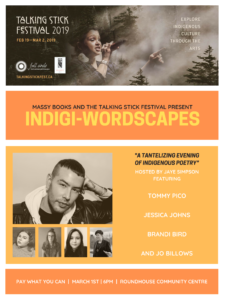 This event takes place on the traditional, unceded, and ancestral territories of the Musqueam, Squamish and Tseil-Waututh Nations.

About Tommy Pico: –
Tommy “Teebs” Pico is author of the books IRL (Birds, LLC, 2016), winner of the 2017 Brooklyn Library Literary Prize and a finalist for the 2018 Kate Tufts Discovery Award, Nature Poem (Tin House Books, 2017), winner of a 2018 American Book Award and finalist for the 2018 Lambda Literary Award, Junk (Tin House Books, 2018), Feed (forthcoming 2019 from Tin House Books), and the zine series Hey, Teebs. He was the founder and editor in chief of birdsong, an antiracist/queer-positive collective, small press, and zine that published art and writing from 2008-2013. He was a Queer/Art/Mentors inaugural fellow, 2013 Lambda Literary fellow in poetry, a 2017 NYSCA/NYFA Fellow in Poetry from the New York Foundation for the Arts, was awarded the 2017 Friends of Literature prize from the Poetry Foundation, won a 2018 Whiting Award, and he’s been profiled in Time Out New York, the New York Times, and the New Yorker. Originally from the Viejas Indian reservation of the Kumeyaay nation, he now lives in Brooklyn where he co-curates the reading series Poets With Attitude (PWA) with Morgan Parker at the Ace Hotel, co-hosts the podcast Food 4 Thot, and is a contributing editor at Literary Hub. @heyteebs

About Jessica Johns:
Jessica Johns is a nehiyaw aunty and member of Sucker Creek First Nation in Treaty 8 territory in Northern Alberta and is currently living, working, and learning on the traditional territory of the Musqueam, Squamish, and Tsleil-Waututh peoples. She is the poetry editor for PRISM international, the Outreach and Education Coordinator for Room Magazine, and is a co-organizer of the Indigenous Brilliance reading series in Vancouver. She has been published in Cosmonauts Avenue, Glass Buffalo, CV2, SAD Magazine, Red Rising Magazine, The Rusty Toque, Poetry is Dead, and Bad Nudes, among others. Her debut chapbook, How Not to Spill, is out now with Rahila’s Ghost Press.

About Jo Billows:
Jo Billows is swift waters, secrets, and salal berries. Northern Coast Salish from the Homalco nation, they were adopted-out and grew up in and around Victoria. They have been living as a visitor in Vancouver, on the unceded territory of the Musqueam, Squamish and Tsleil-Waututh Nations since 2011. They are a two-spirit, queer, trans non-binary, mixed, urban, Indigenous feminist, a spoken word poet, facilitator and a youth worker. Molly hopes to weave together stories in ways that lift up their communities, and contribute to collective healing, rage, resurgence and love.

About Brandi Bird:
Brandi Bird is a Two-Spirit Saulteaux and Cree poet currently living and learning on Musqueam, Squamish and Tsleil-Waututh territory. They study Creative Writing at Douglas College and have been published in Poetry is Dead and Pearls. They were shortlisted for the 2018 Indigenous Voices Awards and the 2019 Pacific Spirit Prize.

About jaye simpson:
two wings soaring ikwe of the Buffalo clan otherwise known as jaye simpson is an Oji-Cree Anishinaabe Two Spirit warrior whose roots hail from the Sapotaweyak & Skownan Cree Nations. jaye is a libra sun, sagittarius rising, scorpio moon but delusionally identifies as a scorpio since it’s all over their birth chart (also a former thespian). jaye holds firm their rage about being a former youth in care, as well as a queer indigenous person & weaves it into poetry, prose & essays. they are published in Poetry Is Dead Issue 17: Coven, This Magazine: September/October 2018, PRISM 57.1: DREAMS & SAD Magazine: Green, GUTS Magazine online blog, with work in the upcoming Room 42.1 Magic issue. they have an upcoming short story in the new Indigenous LGBT Sci-fi anthology, Love After The End with Bedside Press and a piece in Arsenal Pulp Press’ upcoming anthology: Hustling Verse. they have also closed a runway for Evan Ducharme Studio’s HIRAETH 2018. jaye has also held the title of Kwantlen Polytechnic University Slamapalooza 2017 Champion & was on the Vancouver Slam Poetry 2018 Slam Team which are also National Finalists. jaye is Vancouver Slam Poetry’s 2019 Women of the World Poetry Slam Champion and representative. they are a displaced indigenous person resisting, ruminating and residing on xʷməθkʷəy̓əm (Musqueam), səl̓ilwətaɁɬ (Tsleil-waututh), and sḵwx̱wú7mesh (Squamish) First Nations territories.