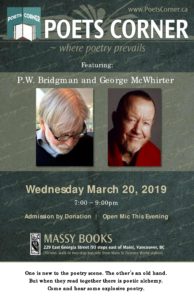 The reading in March brings together an old hand with someone who has just launched his first volume of poetry.  George McWhirter, Vancouver’s inaugural Poet Laureate, will be coupled with relative newcomer, P.W. Bridgman. Here are the bio’s of March’s duo: 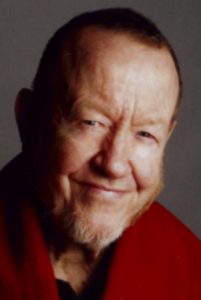 George McWhirter is transatlantically anthologized in The Penguin Book of Canadia Verse and Irish Writing in the Twentieth Century (Cork University Press). Most recent books of poetry are The Incorrection (Oolichan Books) and The Anachronicles (Ronsdale Press). His story collection, The Gift of Women, appeared from Exile Editions in 2014. He served as Vancouver’s inaugural Poet Laureate and edited A Verse Map of Vancouver with photographs by Derek Von Essen for Anvil Press. Lately, his poem “On a Globe Maple” appeared in the League of Canadian Poets’ 2018 Anthology, Heartwood; the poem “Reef” appeared in CLI-FI, Canadian Tales of Climate Change, Exile Editions, 2017. 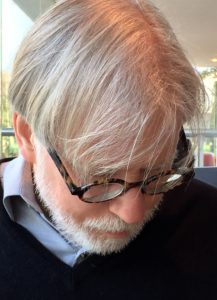 P.W. Bridgman’s first book of poems, entitled A Lamb, was published in September 2018 by Ekstasis Editions. A selection of short stories entitled Standing at an Angle to My Age, published by Libros Libertad, preceded it in 2013. Bridgman’s writing has appeared in, among other outlets, Grain Magazine, The Moth Magazine, The Antigonish Review, The Honest Ulsterman, The Galway Review and The Glasgow Review of Books. He was a participant in the writing summer school program offered by the Seamus Heaney Centre for Poetry at Queen’s University, Belfast in July 2018 and describes that as one of the most formative experiences of his writing life.

Our full Open Mic segment is back for this reading!  Please arrive at least 15 minutes before we get underway to ensure you land a spot on the list. We will be starting at 7pm sharp on Wednesday, March 20.  Looking forward to seeing you!