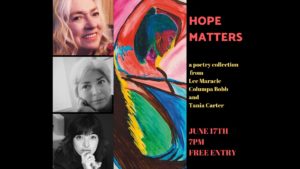 Join us June 17th for the launch of Hope Matters, a collaborative poetry collection from Lee Maracle, Columpa Bobb, and Tania Carter.

Throughout their youth, Columpa Bobb and Tania Carter wrote poetry with their mother, award-winning author Lee Maracle. The three always dreamed that one day they would write a book together. This book is the result of that dream.

The wide-ranging poems in Hope Matters focus on the journey of Indigenous peoples from colonial beginnings to reconciliation. But they also document a very personal journey—that of a mother and her two daughters.

Written collaboratively by all three women, Hope Matters offers a blend of three distinct and exciting voices that come together in a shared song of hope and reconciliation.

Lee Maracle is the author of a number of critically acclaimed works including: Ravensong, Bobbi Lee Indian Rebel, Daughters Are Forever, Celia’s Song (which was long listed for CBC Canada Reads and a finalist for the ReLit Award), I Am Woman, First Wives Club, Talking to the Diaspora, Memory Serves: Oratories, and My Conversations with Canadians, which was a finalist for the 2018 Toronto Book Award and the First Nation Communities READ 2018-19 Award, and continues to be a nonfiction bestseller. She is also the co-editor of the award-winning My Home As I Remember. Maracle has served as Distinguished Visiting Scholar at the University of Toronto, the University of Waterloo, and the University of Western Washington. Maracle received the J.T. Stewart Award, the Premier’s Award for Excellence in the Arts, the Blue Metropolis Festival First Peoples Prize, the Harbourfront Festival Prize, and the Anne Green Award. Maracle received an Honorary Doctor of Letters from St. Thomas University, is a recipient of the Queen’s Diamond Jubilee Medal and is an Officer of the Order of Canada. A member of the Sto:lo Nation, Maracle currently lives in Toronto and teaches at the University of Toronto.

Columpa Bobb has worked as a producer, director, playwright and performer for over 30 years. She is the recipient of a Jessie Richardson Theatre Award for Best Actress for the lead role in The Ecstasy of Rita Joe; she was also nominated for Jessie Awards in the categories of Best Supporting Actress and Best Ensemble Cast for her work in Only Drunks and Children Tell the Truth (Firehall Arts Centre). She was nominated for a Dora Mavor Moore Award for Best Actress for Sixty Below (Native Earth Performing Arts); she was also nominated for a Dora Award for Most Outstanding Production (Youth Category) for Jumping Mouse, co-written with Marion deVries. Columpa was also nominated for a Returning the Gift Award for Contributions to North American Native Writing. For more than a decade Columpa ran Canada’s largest and most extensive empowerment through the arts training program for Indigenous youth in Winnipeg, Manitoba, which culminated in the creation of Urban Indigenous Theatre Company, Manitoba’s only professional theatre organization by and for Indigenous people.

Tania Carter is an actor, playwright and poet whose work has appeared in anthologies and scholarly journals. A member of the Sto:lo Nation, she holds a BA in World Literature and a Masters Degree in Theatre, with a specialization in Playwriting. After living in Toronto for twenty years, she now lives in British Columbia.